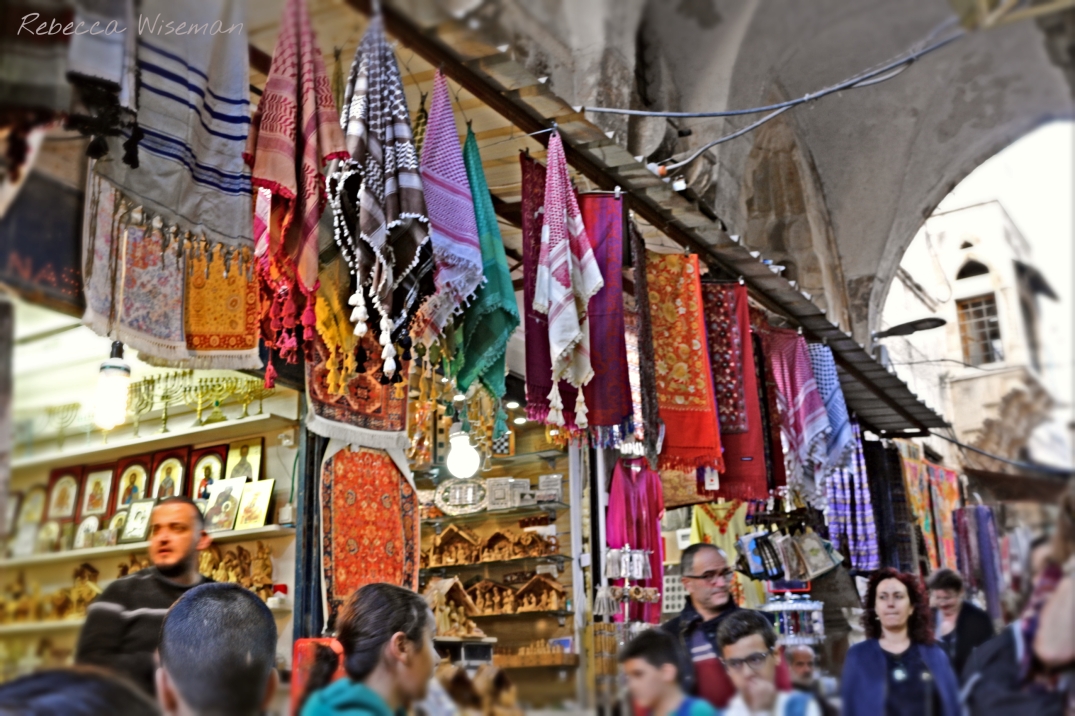 The Old City of Jerusalem is busy and alive with activity. The number of shops, cafes and historic enclaves is dazzling. The colors and smells are welcoming. You will find the usual touristy travel gifts along with artist-crafted jewelry, sculpture & paintings.

I love the colors of the fabrics & scarves seen in this shop. I came home with several beautiful items purchased throughout Israel. 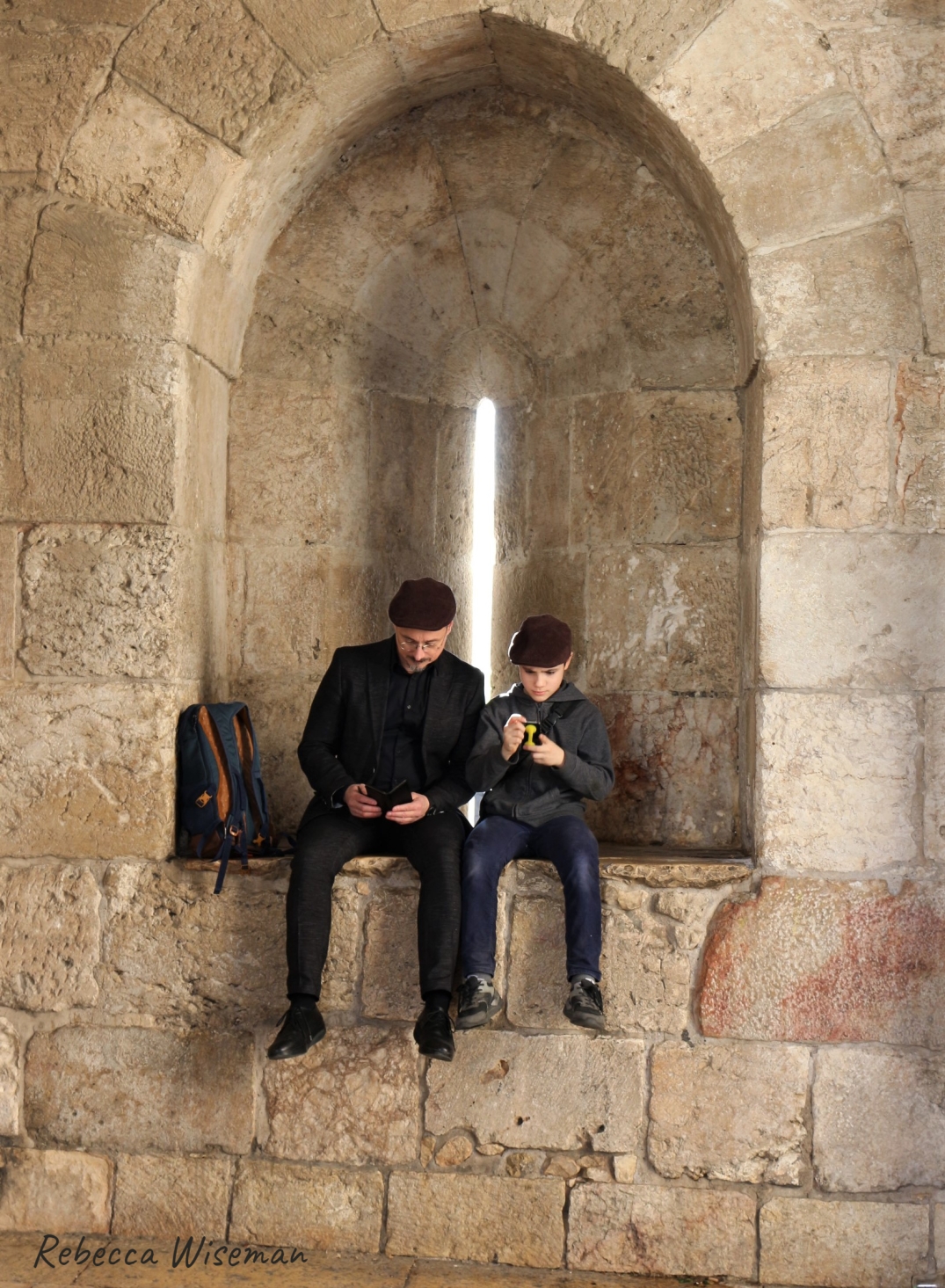 I loved being in the Old City of Jerusalem. The history, coupled with the knowledge that I was walking in the steps of countless others who have trod these narrow streets over a period of 3000 years was mind-boggling.

It could get overwhelming & claustrophobic at times. It’s easy to get lost among the crowd of tourists, or by taking a wrong turn and becoming separated from your group. Our guide instructed us to ask for directions to the Jaffa Gate if we became lost, as our tour bus would be out on the street at the designated time.

As my mom and I made our way back to the Jaffa Gate, we stopped at a little shop to purchase water & some dried fruit. She sat down for a bit and I looked through my camera lens searching for images that would capture a slice of life in this ancient city. Here is one of my favorites:

I don’t know if these two are residents of Jerusalem, whether they are Israeli, or if they were touring the Old City as I was. I just liked that this dad & son found a place to hang out together and check their phones or tablets. I imagine dad had to help his son up to the ledge, which made me wonder how many times a similar scene has been repeated throughout the millennia.

January 12, 2020 by Editor Categories: In The Holy Land, People of the Holy Land, Slice of LifeTags: dad & son, Jaffa Gate Leave a comment 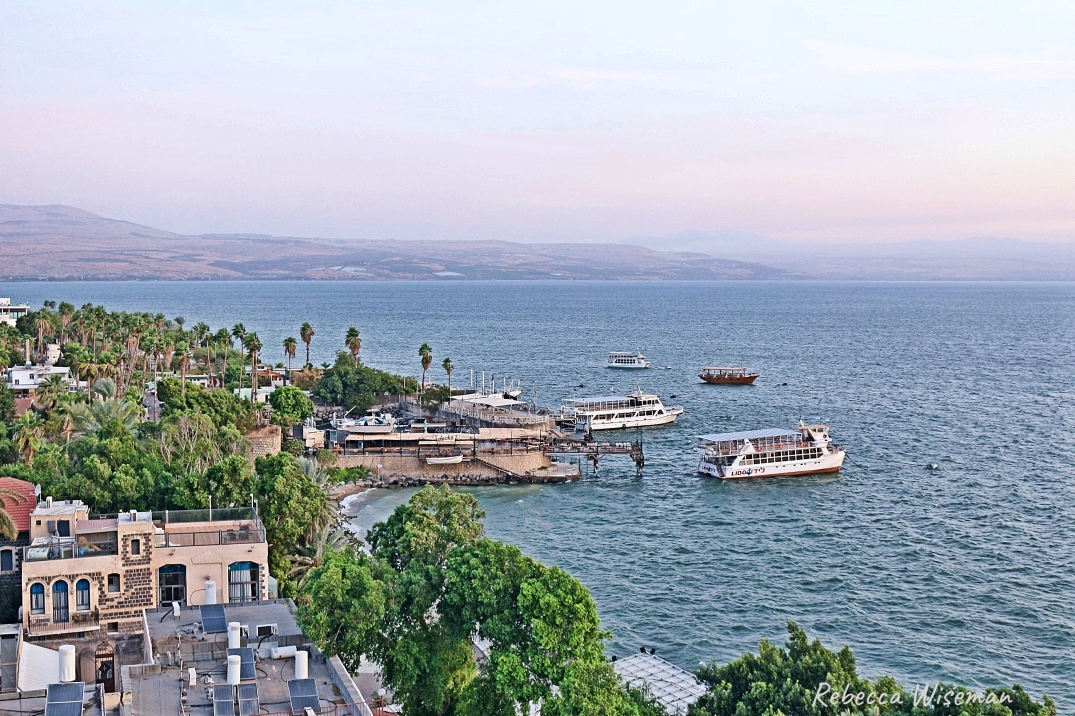 We left Nazareth and made our way to another beautiful area in Israel – the Sea of Galilee region.

The sea is really a lake, and turned out to be smaller than I imagined, but had more of an impact on me than I anticipated. This is another region that I could spend more time exploring…at my own pace.

We arrived late in the day and visited the Church of the Apostles, which I will show in a later post. For now, I am just posting the 1st evening, that included a nighttime boat ride on the Sea of Galilee and some beautiful views of the sea and Tiberias, the city where our hotel was located.

From Wikipedia: Tiberias is an Israeli city on the western shore of the Sea of Galilee. Its Old City holds important Jewish and Christian pilgrimage sites including the Tomb of Maimonides and Abulafia (Etz Chaim) Synagogue. The waterfront features the restaurant-lined Yigal Allon Promenade, a marina and a fish market. South of the city, Hamat Tiberias National Park is home to famed mineral hot springs dating to antiquity. 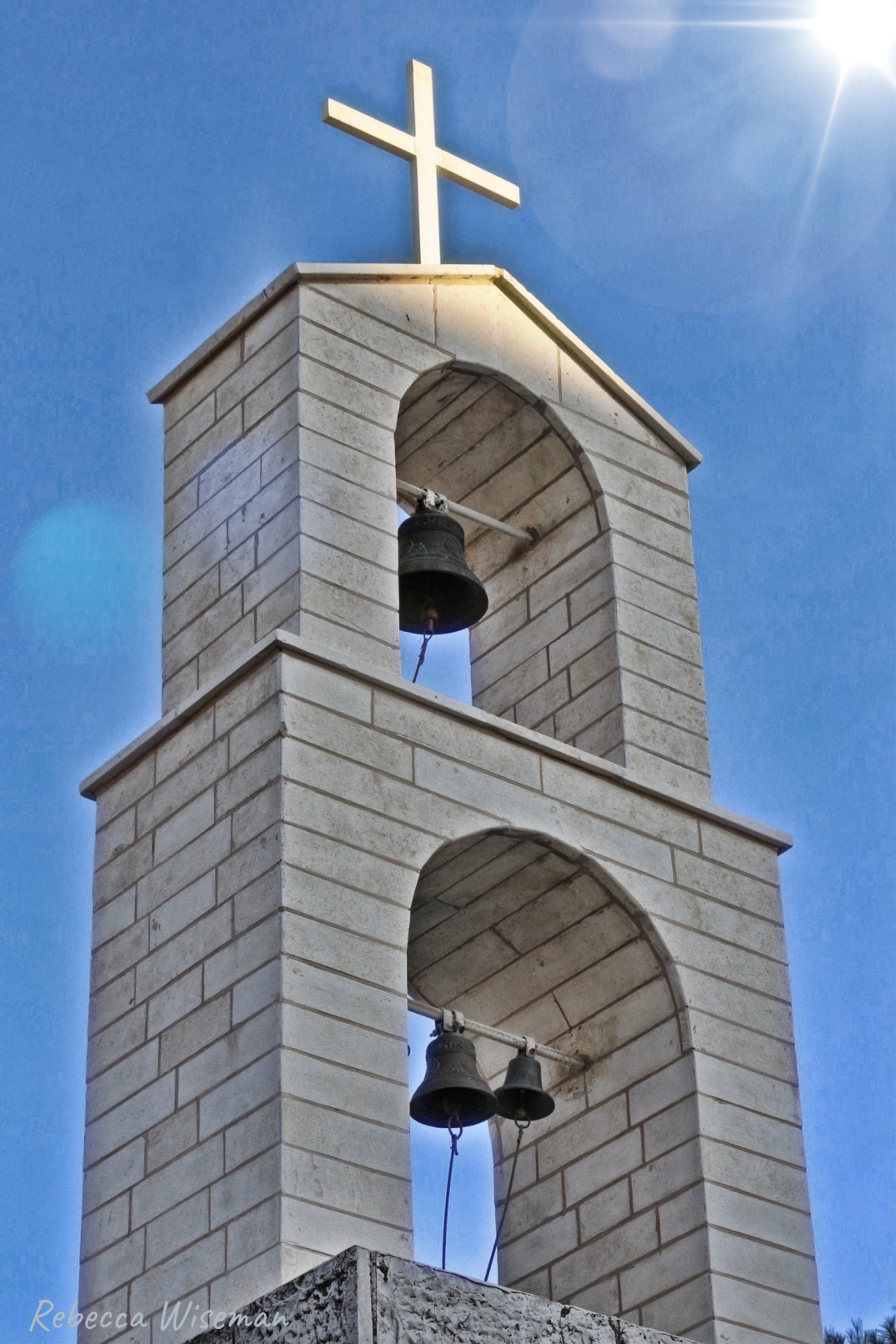 One of our side tours in Jerusalem was to a Greek Orthodox Monastery on the Mount of Olives. The entrance is gated with iron fencing topped with barbed wire all around.

I loved the nun who led us around the grounds and shared the history of the small monastery, with its sometimes violent and tragic past. She was feisty and down-to-earth as she spoke in rapid Greek, which she considerately slowed down so those of us who aren’t fluent could follow along.

Inside the fence stood this little metal representation of the monastery & church. I’m not sure if it had a more significant purpose than just being purely decorative.

I tried to get a full shot photo of the flags but the wind was not cooperating.

The bell tower & cross looked beautiful in the light.

January 8, 2020January 8, 2020 by Editor Categories: Architecture, In The Holy LandTags: Christians in Israel, from the Mount of Olives Leave a comment 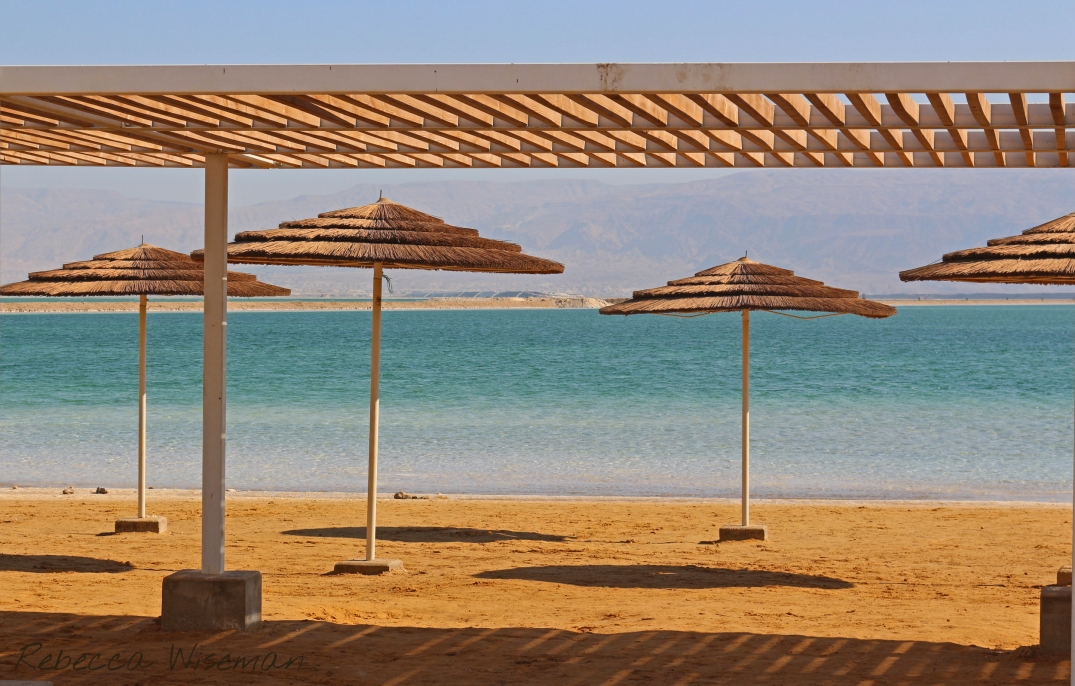 I am not posting photos in the itinerary order of our trip. If I hadn’t taken quick notes on my phone I wouldn’t remember the order of days and places at all, lol.

We stayed a night in Jericho, and from there we headed to Sinai in Egypt. On the way we made an entirely too brief stop at the Dead Sea. This area is stark and beautiful. Coarse, salty sand coupled with the incredible blues of the water that range from pale blue to teal to turquoise. All of this surrounded by the desert colors of the low country…actually the lowest body of water the on earth!

Happy Moo Year! A small herd of cattle grazing on the close of the 1st weekend of 2020. In Central Texas.

I set out to capture a shot of a hawk that was intently focused on something in a field, but it flew away before I had a chance to point, focus and shoot. I was disappointed, but the sun was starting to set & and I noticed this bit of barbed wire on a fence post.

I’m rather please with the photo 😉

We drove from from Tel Aviv to Nazareth, a beautiful city in northern Israel. It’s population is predominantly Arab citizens of Israel, with approx. 69% Muslim & 31% Christian. I loved this area! So many hills, lots of green, clean, cool air & warm, welcoming people.

The view of the city was taken from Mount Tabor as we visited the church located at the peak: the Church of Transfiguration at the summit, which is divided into Eastern Orthodox (northeast) and Roman Catholic (southeast) areas. We were touring the Greek Orthodox monastery, although part of our group got on the wrong van going to the top and were deposited at the Catholic site, and had to trek on foot around the curved road to rejoin us.

This is the town where Jesus grew up. I can only imagine the wonderful days he spent learning to be a carpenter at Joseph’s side. He was also learning the ways of His Heavenly Father, as he spent time in prayer and in the books of the Old Testament.

This is a place I want to return to someday.

“You are the light of the world—like a city on a hilltop that cannot be hidden.” Matthew 5:14

January 5, 2020January 4, 2020 by Editor Categories: From the Road, In The Holy LandTags: city on a hill, In Jesus' footsteps, Nazareth Leave a comment 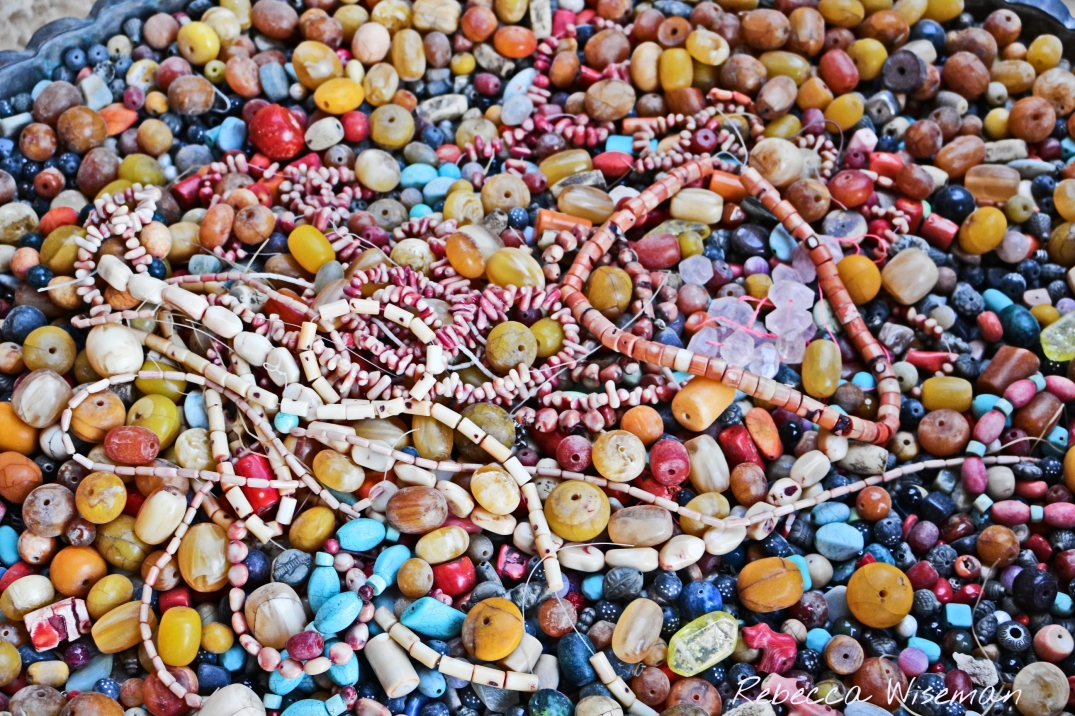 “The most important thing I can tell you about aging is this: If you really feel that you want to have an off-the-shoulder blouse and some big beads and thong sandals and a dirndl skirt and a magnolia in your hair, do it. Even if you’re wrinkled.” ~ Maya Angelou

I love reading the wisdom of Maya Angelou. Yes, Miss Maya, I think I will wear those beads…

To Christians, candlelight is a symbolic reminder of who we belong to & who we represent:

“Once again, Jesus spoke to the people and said, “I am the light of the world. Whoever follows Me will never walk in the darkness, but will have the light of life.” ~ John 8:12 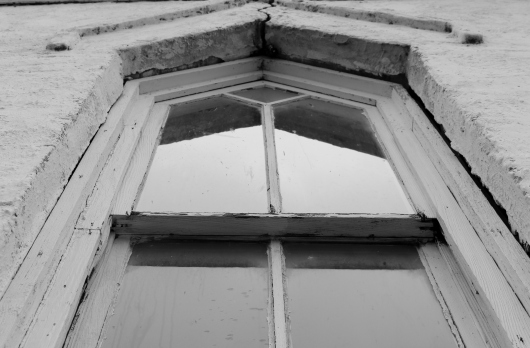 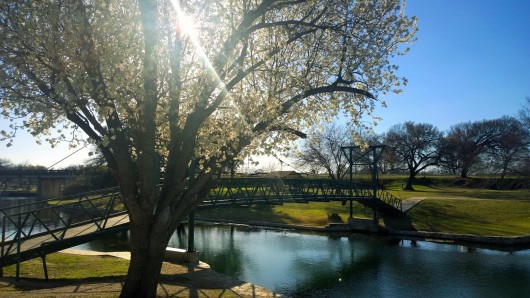 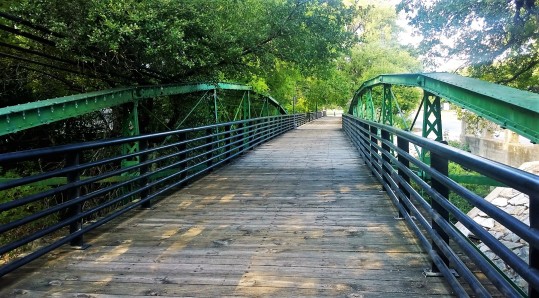